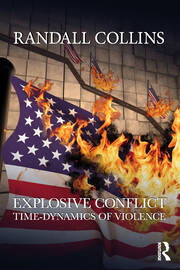 This sequel to Randall Collins' world-influential micro-sociology of violence introduces the question of time-dynamics: what determines how long conflict lasts and how much damage it does. Inequality and hostility are not enough to explain when and where violence breaks out. Time-dynamics are the time-bubbles when people are most nationalistic; the hours after a protest starts when violence is most likely to happen. Ranging from the three months of nationalism and hysteria after 9/11 to the assault on the Capitol in 2021, Randall Collins shows what makes some protests more violent than others and why some revolutions are swift and non-violent tipping-points while others devolve into lengthy civil wars. Winning or losing are emotional processes, continuing in the era of computerized war, while high-tech spawns terrorist tactics of hiding in the civilian population and using cheap features of the Internet as substitutes for military organization. Nevertheless, Explosive Conflict offers some optimistic discoveries on clues to mass rampages and heading off police atrocities, with practical lessons from time-dynamics of violence.